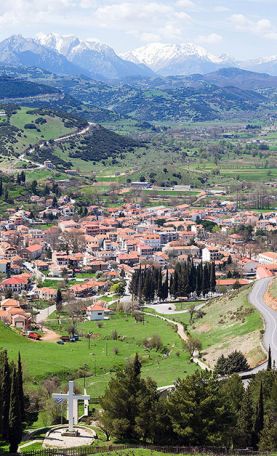 The region of Kalavryta, former "Province of Kalavryta," begins with the historical course from ancient times. Pausanias in "Arcadian" describes the ancient Lousoi the Kleitora, the Psofida, the Kynetha, Leontio, cities whose ruins are preserved till today.

The name of the municipality came from the homonymous city. Initially find the name on Franks. The year 1205 AD the barony Kalavryta formed with 12 knightly fiefs. The fortress of Kalavryta became one of the most important medieval castles in the Peloponnese. The Castle has been linked to the family of Paleologus and stands today above the town of Kalavryta.

During the 1821 revolution, Kalavryta played an important role. The liberating spirit of the time was connected directly to the Monastery Agia Lavra (founded in the 10th century AD), located 4 km from the town of Kalavryta. There, on 21/03/1821 Palaion Patron Germanos declared the revolution  raising the sacred banner, which still exists and is the main relic of the monastery. Also, an important role played the Great Cave Monastery (founded in the 4th century AD), located 10 km from Kalavryta, on the way to Diakofto and at an altitude of 924 m. A typical relic of the miraculous holy icon of the Virgin Mary, work of Evangelist Loukas.

The events that took place during the Second World War, marked the area of ​​Kalavryta. On 12/13/1943 the Nazi occupation troops executed all the male population of Kalavryta city 13 years or older and completely destroyed the city. Living monument of those tragic events is the "Place of Sacrifice," the hill of Kapi and the elementary school of the city that houses the "Museum of the Holocaust." The Nazis also proceeded to disasters and mass executions in Rogoi villages Kerpini, Zachlorou hoarse, Souvardo and monks executions and burning the monasteries of Agia Lavra and the Great Cave.

Today Kalavrita and the surrounding area are a resort for all seasons.

The Ski Centre is a constant challenge for the senses, a paradise of winter sports. Located on the slopes of Helmos, in Xirokambos, 15 km from Kalavryta and operated since 1988 featuring 11 tracks total length of 20km.

At a height of 2,340 m at the top of Helmos (Neraidorahi) has installed a new telescope "Aristarchos", one of the largest and most important in Europe, with a mirror diameter of 2.3 meters.

Also for lovers of ecotourism, our place offers sights of rare beauty, which you can discover along the international path "E4", or dozens of other paths.

Monuments of nature is the gorge of Vouraikos River with its unique cog railway, the Waters of the Styx, the special kind of Cave of the Lakes castles, sources of Aroanios and Ladon, Lake Ladon, Lake Tsivlou and many others.