"On the bottom floor of the cave were found fossilized human bones and various animals including hippopotamus!" 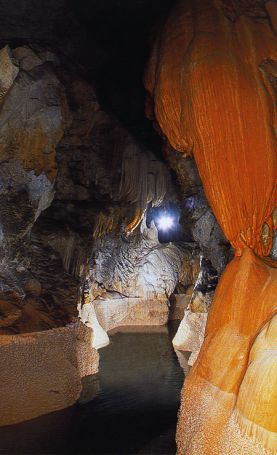 The discovery in the cave in 1965 by I. Melentis, Professor of Palaeontology, of fossil bones of deer and hippopotami has raised, among others, questions related to the area's fauna and flora.

I. Melentis believed that the cave had been used as shelter for the hippopotami in the course of the dry periods, and that the feet of those animals had been adjusted to terrestrial living. The bones were dated to the Middle Pleistocene (500,000-200,000 years before present) and are kept in the Palaeontological Museum of the University of Athens.
According to another view, these fossil bones were carried away by the waters descending from the interior and were redeposited near the cave's entrance.
The opposite view, namely that the bones came from the outside and were found in the cave together with the deposits of the nearest stream, whose level would have been higher, could not be precluded; others claim that they were transported there by carnivores. In any case, the climate in the area must have been rather humid, which would explain the presence of hippopotami. In addition to the above-mentioned, other bones, mainly of animals which were consumed or stalled there during the Neolithic and Bronze Ages, were found in the Cave of Lakes. Bones mainly of sheep and goats were found in the cave, while those of pigs and bovines come next. Wild fauna, such as deer and hare, and birds, especially raptors, were also identified. In general, the Cave of Lakes should be considered an area of human settlement and a stable of domestic animals, while wolves, foxes, red deer and bears lived in the wider mountainous environment.