"The man used the cave from the Neolithic Age, throughout the duration of the Early Helladic until the Late Helladic period." 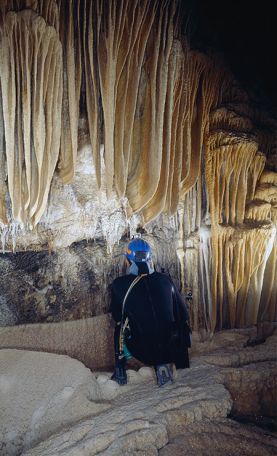 A group of primary and secondary (removals of relics) burials was discovered during the excavations, inside and outside the cave, dating from the Neolithic, the Early Helladic, the Late Middle Helladic and the Late Helladic III periods.

This osteological material is particularly significant, as a source of information about the ancient societies, combined with the period it covers and the geographical location where it was found, since it enables a juxtaposition of the elements and a comparison with neighbouring areas.
The material is being studied by specialists, in order to assess the demographic data of the area, to explore the state of people's health during prehistoric times, possible epidemics of the population, and finally to discover the biological affinities between them and the neighbouring populations.
As for their age, it has already been determined that they were mostly children, pre-adolescents and adolescents, and also youths, aged 20-25 years. The absence of older ages, if not coincidental, may require further research. Another problem that still remains, is the significant divergence in the size and shape of the face and the skull in relation to other populations. This divergence is also observed among the populations of neighbouring areas.