Although the dry and horizontal part in the beginning of the cave was known in very old times, it was first explored in 1964 by inhabitants of the community of Kastria, at the initiative of the inhabitant Vassilis Tempelis; the exploration was completed in 1965 by the Greek Mountain Climbing Association with the participation of Greek and foreign speleologists.

In 1981 the Greek National Tourist Organization started the works of touristic development and the first completed part was opened to the public in 1990. In the meantime, the contribution of the Greek Speleological Society during the cave's exploration and touristic development has been decisive; its president was the late Anna Petrocheilou, to whose memory the first hall was dedicated. The role of the Ephorate of Palaeoanthropology-Speleology of the Ministry of Culture which is in charge of it and has the supervision of the works, was also significant.

In general, the cave's walls are embellished with splendid stalactite complexes, which stimulate the eye and the imagination to create their own images, as the visitor goes through this stone forest full of surprises, while walking on a safe corridor. At the end of this corridor the visitor faces the «Castle», one of the most impressive formations on the ground recalling a castle's battlements, and even a «rampart» a few metres before that. Here, as a result of heavy rainfall, a large terraced lake was created and waterfalls follow their own rhythms of the Water Music, which draws its inspiration from Handel and could produce a new, both preclassical and post modern, musical theme. The flow of drops also has its own music, provided that we can listen to it in silence. Silence is the minimal debt of respect for such an important monument, that Nature playfully created at a good moment.
Small or large lakes, 13 in total, succeed one another, while terrestrial areas alternate with lake ones until the cave's end, for a total length of nearly 2 km (1980 m) and an area of 20,000 m2. Proceeding further into the interior, the visitor has a chance to realize the particular morphology of a cave which has been opened along a fault: hence its narrowness and very high ceiling. Moreover, one sees that the rock waterfalls are here the most common motif, since it is natural for the water to become «petrified», as it flows or rather discharges itself into the interior of the cave from different points on the sides and ceiling.
The colours may vary, depending on the oxides contained in the rocks. This is an additional element of beauty together with the variations in the shapes of the rock decoration. It recalls at times a pulpit, a little church, a kiosk, a manger, a chandelier, or a. floating figure, apparently watching our steps from above. We should here point out that the names are tentative and conventional. They were generated by the enthusiasm and the first impression formed by the explorers, and especially the most enthusiastic ones, such as Anna Petrocheilou, who lovingly and tenderly gave names to every corner of the cave, to each stalactite and stalagmite that presented a similarity to something. We often refer to such names, but prefer to let the viewer see, compare, dream and create his own fairytale all by himself. In order to facilitate the guided tour of the cave, various points- stops marked by Latin letters from A to Μ have been defined in the first, developed part.

We do believe that the visitor should be left to discover his own aspects alone, without limitations and binding suggestions, and to develop a personal relationship with the area. In May 2001 yet another new part, 150 m long, was developed with updated means and specifications, and opened to the visitors, who have here the chance to admire an even richer decoration: we note the wonderful «hanging bridge» and the «waterfalls» «falling» at the left and the right and meeting each other at the end of this route. The visitor has the feeling of being on a floating corridor. Up to this point we have only got to know three lakes. There are another ten.

The new part seems whiter and cleaner, since it has not yet been oxidized by our breath. And yet the green algae has penetrated, hence the colour that we see at certain points. For this reason the cave's microclimate should be the object of continuous study by specialists and of permanent care by all of us. Within a cave we all have a chance to feel the Earth's dew and happiness, but we also ought to feel the tears and pains it experiences giving birth to a stalagmite or raising a stalactite. 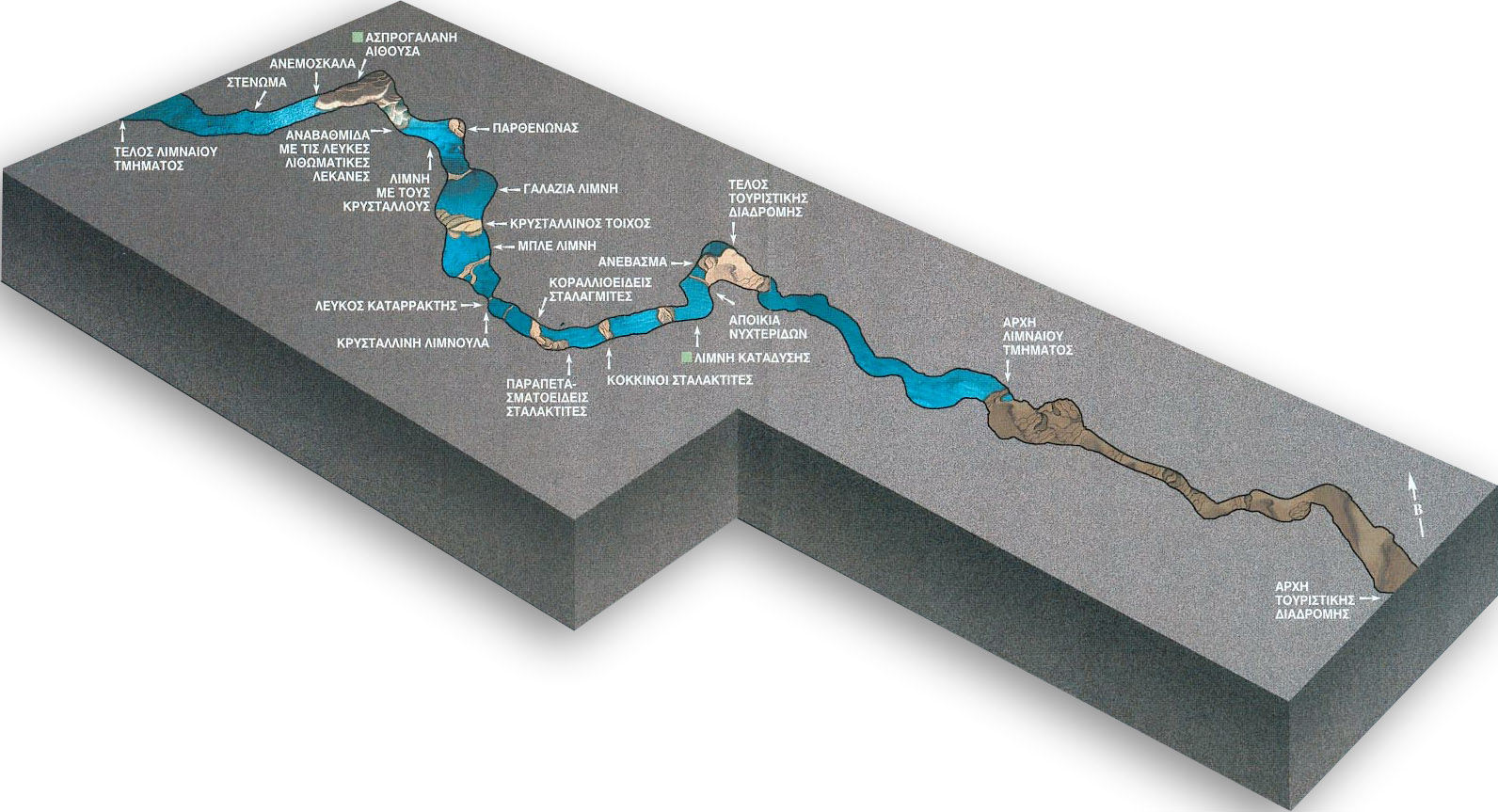 Floor plan of the Lakes segment (A) 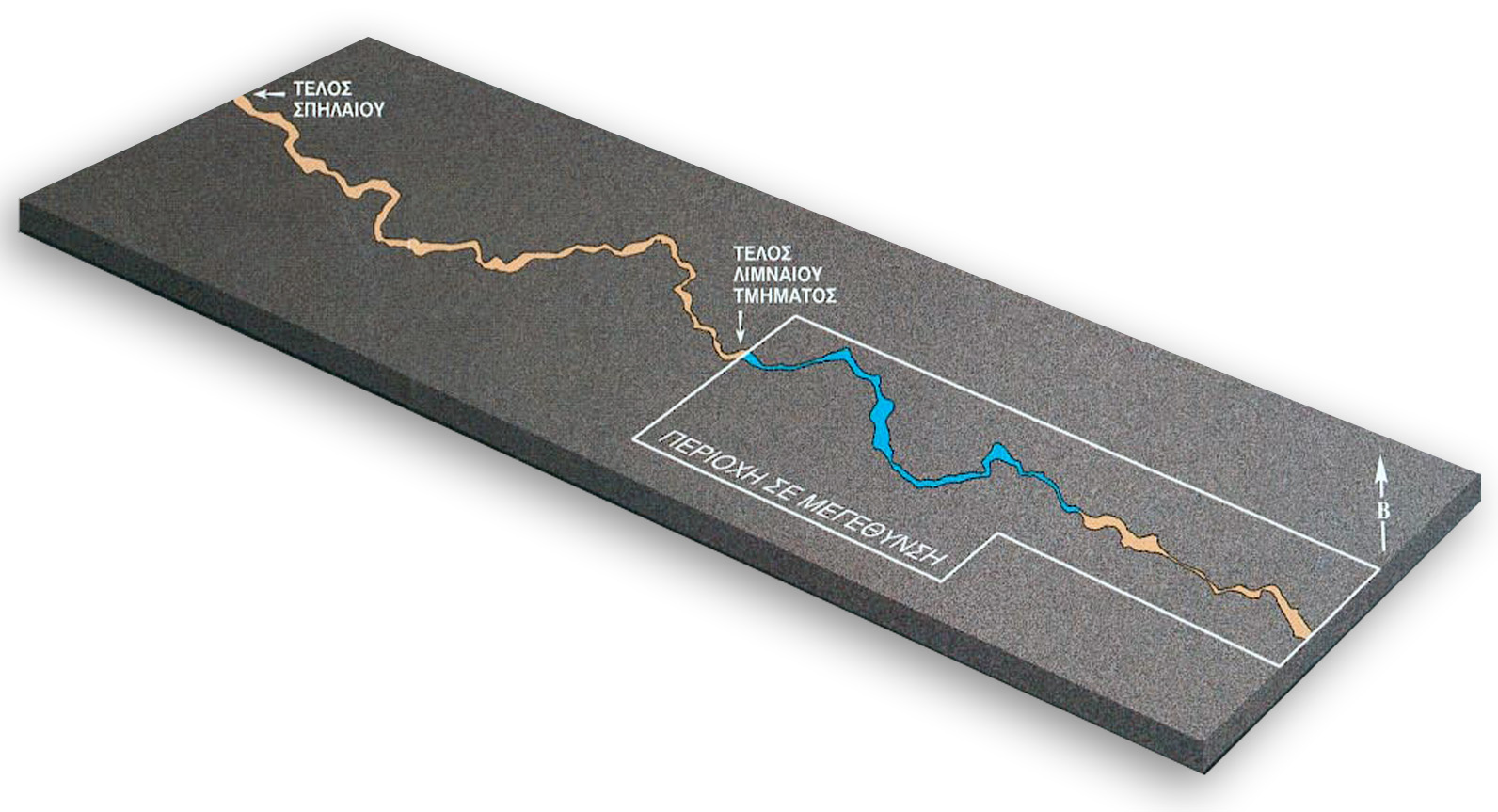 Cross section of the Lakes segment