"The first findings that came to light were dated to the Late Neolithic, the Early, Middle and Late Bronze Ages". 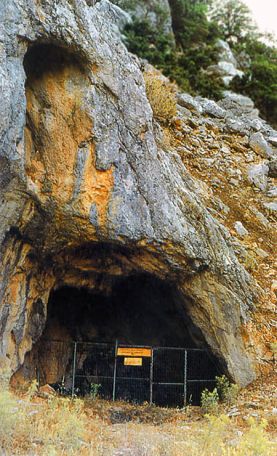 The first archaeological autopsies inside the cave were carried out in 1967 by Efthymios Mastrokostas and in 1971 by Photios Petsas.

The collection of ancient sherds, coming from an accidental trenching outside and a limited excavation inside, have produced the first examples of Neolithic and Early Helladic pottery respectively.
A few years later, in 1992-1994, the excavation of the Ephorate of Paleoanthropology - Speleology, headed by Adamantios Sampson*, currently Professor of Prehistoric Archaeology at the University of the Aegean, has brought to light anthropological and archaeological finds, which provide evidence that this cave was not only known to man, but also inhabited for long periods of time, with the first indications going back to the sixth millennium B.C. The excavation in the Cave of Lakes came quite late, compared to its exploration and touristic development. It was carried out in three stages and although only a small part of the cave was tentatively explored, as it usually happens with cave excavations, the sections made at different levels on the inside, the entrance and the sides, gave sufficient information about the various phases of its habitation.
The first findings that came to light were dated to the Late Neolithic, the Early, Middle and Late Bronze Ages. More specialized studies have led to the conclusion that both the inside and the outside areas had been used more often in the period called Late Neolithic Ib-II, which extends from the middle to the end of the fifth millennium B.C., with a main phase dated to c. 4300 B.C. and a continuous use for almost 300-400 years. But even much later, until the Late Bronze Age (c. 1100 B.C.) there was a multiple use of the area, particularly near the natural entrance and the first hall of the cave, which had always been more accessible and where there is more light.
In the Cave of Lakes, after the first 80 m, which is the length of the first part, it becomes difficult to move forward; this was also the case in ancient times, because a vertical rock rises up at this point;
the second and third part of the cave with the rocky basins follow. In periods of rainfall the water from the lake fell, in the guise of a waterfall and inundated the first hall. Such flood episodes were recognized during the excavation: these are layers of clay, lacking man-made archaeological material, in contrast to what happens in the other layers, which produced settlement floors, with hearths, ash and carbon, small constructions made of dry stone walls, parts of a pottery kiln, fragments of vases, stone and bone tools, clay spools, a stone ornament, loom weights, animal bones and an important anthropological find of primary or secondary (i.e. set aside) burials of nearly 13 people. The clay vases were for everyday use and present a great variety of shapes. In the Late Neolithic period mentioned earlier, as many as 30 different types of vases, both small and large, were identified for the preparation of food and the storage of products.
It is not easy to determine from the finds whether the cave had been used for habitation rather than storage. Nevertheless, it was observed that the greatest percentage of large closed vases come from the interior of the cave; in contrast, the small utilitarian open ones come from the outer sections. In the light of this, it is quite plausible that the storage should have taken place inside and the preparation of the food outside the cave, depending on the weather. The temporary inhabitants of the cave must have been breeders of goats, pigs and a few bovines. Their diet would have been supplemented with the hunt, since we know that deer and hare were common in the Aroania mountains. Furthermore, the members of this distant community were undoubtedly engaged in the usual domestic occupations, such as the grinding of seeds, the treatment of skin, wood, stone and wool; for these they used grinding tools, handaxes and obsidian or flint flakes. Precious jewels, decorated vases or important objects were not found in situ, and this may indicate that this community was rather poor. We may conclude that the cave had been the nucleus of a small Neolithic community, with a farming and animal-breeding settlement that had been installed around its entrance, and at times in its interior, taking advantage of what a cavity could offer: mainly protection from the weather conditions.
In the Early Helladic period human activity was greatly reduced, and the cave's use became much more infrequent and sporadic, while any permanent or seasonal long-term habitation should be precluded.