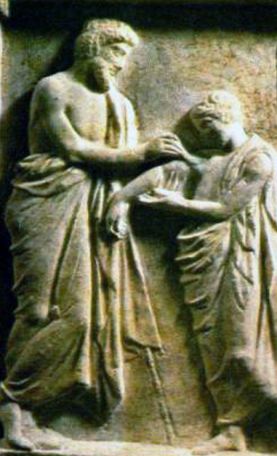 «Above Nonacris are the Aroanian Mountains, in which is a cave. To this cave, legend says, the daughters of Proetus fled when struck with madness; Melampous by secret sacrifices and purifications brought them down to a place called Lussi.» Pausanias: Description of Greece, Arcadika, XVIII, 6 - XIX, 1

The Cave of Lakes combines, in an admirable way, ageless natural beauty, with the remains of habitation and use, ancient evidence and myth, «the firm background of history».
According to the myth, preserved in many variants by Pausanias in his Arcadika, by Apollodorus in his Library and by Vitruvius, the daughters of the King of Tiryns Proetus, Lysippe, Iphinoe and Iphianassa found refuge in a cave in the Aroania, above Nonacris, when they were obsessed by madness, imposed as a punishment, either because they boasted that their palace was more beautiful than the temple of Hera, or because they did not respect the goddess' xoanon. It seems that both the myth and the punishment originated from the Argive Heraeum.
According to another version, the Proetids were punished because they did not participate in Dionysus' rituals. Some variants of the myth claim that their madness was transmitted to all the women in the area of Argos, and that the eldest Proetid died of exhaustion. As Pausanias records, the Messenian healer and seer Melampous, with secret sacrifices and purifications, led the daughters of Proetus down to a place called Lussi, which in antiquity was a flourishing town. Today it is an important archaeological site. The Cave of Lakes appears to have numerous elements which would favour its identification with the cave of the Proetids, a view supported by a few contemporary commentators of ancient texts and by archaeologists.
And yet other scholars, especially archaeologists and geologists, have a few reservations: according to the former, there are no finds from excavations which could document a cultic character of the cave; for the latter, the geographical elements recorded, namely that Melampous led the daughters of Proetus down to Lussi, are not convincing, since Lussi is higher in relation to the cave. Moreover, there is no indication that the cave was used as a shrine in historic times, although the rock decoration and the stalagmitic formations might have stimulated religious feelings, as was the case with many other caves in Greece.
The size of the cave, its really impressive interior, the fact that there is water there, and the absence of another large cave with similar characteristic in the area, speak for its identification with the myth's cave. Even the coincidence that among the human skeletons there were also bones of young girls, bear out mythology and the theory that locates the drama in the Cave of Lakes. Nevertheless, the doubts expressed have their grounds too. For although the variants refer, somewhat vaguely, to the mountainous region of the town of Cleitor, they do not give clear information about the exact place of the cave or the spring mentioned in the myth. Regarding the waters of the cave, a tradition related to the mythical narrative and especially its later versions, maintains that they are unsuitable for washing and cause an aversion to wine; this may derive from certain observations and symptoms attributable to the water's chemical composition defined through its qualities rather than described as such.
It is said that Melampous took one of Proetus' daughters as his wife together with a third of the kingdom as a reward for his services. In any case Melampous is an agent of the new religion, while being a personification of hellebore, a herb known for its healing qualities, as mentioned by Ovid in his Metamorphosis, Pliny in his Natural History, and Dioscurides in his Materials of Medicine. An echo of the ancient myth may be recognized in a thrilling local tradition of Kastria, mentioned by G. Lambrou: according to this, the village girls sought refuge in the cave and did not want to leave, because they were suffering from anthropophobia. For this reason, the author himself does not preclude the hypothesis that the Cave of Lakes may be the one of mythology.
Let us note that the identification of Pausanias' cave has also preoccupied a few nineteenth-century travellers, who came to Greece but do not mention in their writings the one of Lakes, which they apparently didn't know; as a result, they choose various points of Apanokampos or the town of Cleitor in order to define its position.
Until this is determined, and regardless of the ancient myth, it is certain that the «Cave of Lussi» cultivates its own mythology, based on the elements offered by its location, the finds up to now, and its unparalleled beauty.