"The Cave of Lakes, formerly called Troupissio, is located at an absolute height of 827 m at a distance of 17 km from Kalavryta and 9 km from Kleitoria". 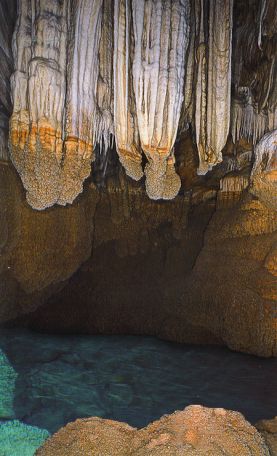 The provincial Kalavryta-Kleitoria road passes just a few metres away from the cave's artificial entrance and just in front of the natural one.

The spacious and impressive natural entrance (3.50 m high and 6.50 m wide) could not have gone unnoticed by passers-by. Should we add to this element its orientation to the East, we can easily understand why, at least the first chamber, has been used by man for such long periods, from prehistory to the historic times. «The Cave of Lakes» as it is now called, impresses the reader even with its very name.
For the viewer, the impression is stronger and unforgettable. Lakes in the interior of a cave are neither common around the world, nor in Greece, where they constitute a unique geological phenomenon.
Here the waters sometimes overflow in the winter and stagnate in the other seasons, in the 13 terraced lakes. Relatively recent floods are mentioned in the villagers' accounts for 1922 and 1940, as a result of torrential rainfalls. According to geologists, the cave has been partly opened within the cretaceous limestones of the Tripolis geotectonic zone, and partly within the late cretaceous thin-bedded limestones of the Pindos zone. It has been developed along a fault directed NW, and its general morphology is similar: it is long and narrow, and has a comparatively very high roof.
From the hydrological viewpoint, the cave may be separated in four parts, starting from its natural entrance, located 83 m lower than the highest level of the cave.
The first part is dry, almost 80 m long, and its floor is horizontal, covered by a thick layer of red earth. The part where the excavations were carried out does not communicate with the rest of the cave, because of altitudinal differences caused by a fault.
The second part is about 700 m long; its main feature is the successive lakes, created on the ground, through peculiar carbonic formations that prevent the continuous flow of the water. This part, which could be characterized as morphologically and hydrologically active, is also marked by its rich ceiling decoration of rocky formations.
The third and largest part, which is over one kilometre long, has intense older and more recent precipitations, which, according to scientific studies, isolated it hydrologically from both the previous part of the lakes and from the next, small, 50-metre long fourth part, where we encounter the basins (gours) with the water collection once again.
The water in the cave derives mostly from an intense flow of drops in periods of great rainfalls, but also, partly from the Apanokampos swallow-hole, which is higher at a distance of 4 km. Nevertheless, in the prehistoric periods, the waters that flew to the cave from the shallow-hole were most probably changing direction from time to time, and this accounts for the long intervals when the cave was almost dry.
The total length of the cave is nearly two kilometres and its shape may be recognized in the oblong, snake-like section of page 46.

PHOTOS OF THE CAVE